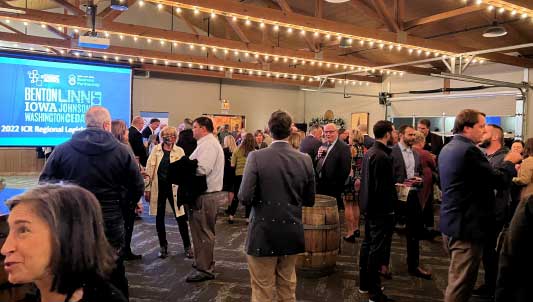 At a press conference in March, Governor Kim Reynolds announced the creation of the Iowa Commercial Aviation Infrastructure Fund (ICAIF). This $100 million program, originating from funds distributed to Iowa through the federal American Rescue Plan ARPA, will be directed to Iowa’s commercial service airports, including $28.35 million to the Eastern Iowa Airport (CID).

Thanks to the advocacy efforts led by CID Director Marty Lenss, with the support of numerous business, non-profit, economic development, school and municipal leaders throughout the region, CID’s funds will be directed to the construction of the fourth phase of the terminal modernization program.

The global pandemic caused a significant drop in the Eastern Iowa Airport (CID) revenues. Nearly 84% of the airport’s revenue is derived from air passenger traffic. The revenue reduction included landing fees, parking, restaurants, and passenger facility charges (PFCs). This decrease in revenues negatively impacts CID’s ability to fund current, as well as future projects, vital to the ICR region as well as the state of Iowa. As service levels recover faster than anticipated, CID has critical infrastructure needs that will now be met quicker with the infusion of these funds.

CID is a key economic driver for eastern Iowa and the state. In fact, a 2017 economic impact study noted CID’s annual impact at $451 million in total economic activity, $171 million in total wages, and 5,000 total jobs. CID’s growth is a direct testament to the economic health of the region.