When most people hear the word airport, they visualize travel, vacations, and business trips. However, around the Eastern Iowa Airport (CID) people are not the only thing getting in and out of town. CID is responsible for handling and shipping nearly 50 percent of Iowa’s cargo. An astounding amount, that is due to superior geographic location, a need for airport diversity aside from solely passenger transport, and an increase in shipping demand that opens the door for huge growth opportunities.

The air cargo market is made up of three main cargo carriers, all in which have a presence in Cedar Rapids- UPS, FedEx, and DHL. While CID has seen record-breaking passenger numbers in the past, cargo growth has also seen a major increase in the last several years, in large part from the increased demand of e-commerce. Increased demand, and a desire to separate cargo operations from commercial service activity near the terminal, prompted a move for cargo and an expansion for one of the incumbent cargo carriers.

“Due to the increase in both services, we really needed to separate air cargo away from the passenger terminal. We started looking at the whole campus and determined we needed to create an air cargo area to accommodate the growth,” says Marty Lenss, CID director. “We are strengthening our knowledge about air cargo services.” 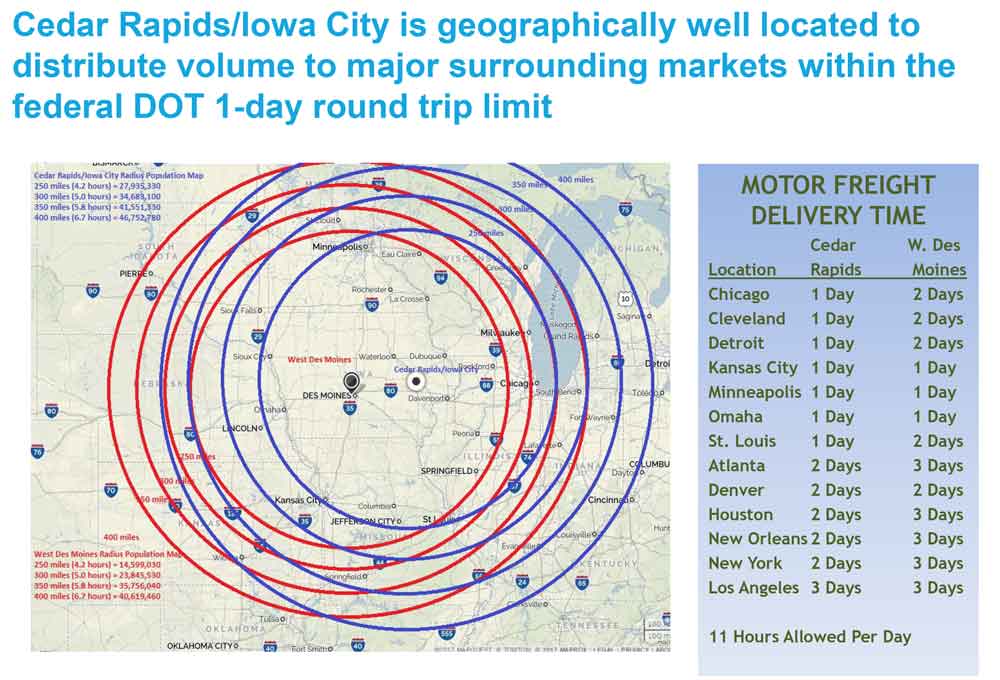 In September 2018, CID received an $8.8 million Federal Aviation Administration discretionary grant to relocate and expand its cargo operation, giving the airport capabilities to handle more of the state’s cargo demands. The grant, which is the largest discretionary grant CID has ever received in one year, was part of the federal government’s Supplemental Appropriations funds. “Cargo has become a large part of CID’s overall operation,” Lenss says. “We relocated UPS and created an air cargo complex. Part of the complex included development of roadways and parking lots to ensure easier accessibility. Currently UPS’ building is 8x’s larger than what they previously leased.”

Geography leads the cargo success story. “As air cargo moves from plane to truck, drivers are limited by DOT time limits which only allows them to drive 11 hours in a day. Based on CID’s geography, drivers are able to reach several large cities within the DOT time limit of 11-hours. Our geography advantage is nearly 12 million more people than trucks leaving from Des Moines.”

The momentum at CID continues to take off as they look ahead at further growth opportunities. Given the strong and growing economy of eastern Iowa, it’s a matter of time when demand for air cargo increases even more. Team CID has all the ingredients ready to help tackle the increased economic growth. The proactive steps being made is one of the many reasons Eastern Iowans are lucky to call CID their airport.